What is UpSkill Houston?

AN INDUSTRY-LED COLLABORATION WORKING TO CLOSE THE SKILLS GAP

The Houston region has experienced incredible growth over the last several years. Led by a resurgence in energy, petrochemicals, manufacturing, life sciences, and construction, the region’s economy has been widely acclaimed as one of opportunity. However, leaders from across the business community have identified one of the region’s most pressing issues as finding qualified workers for good jobs vital to the success of our industries.

The mounting challenge for greater Houston’s industries equals potential advancement for its citizens. UpSkill Houston helps to ensure that unemployed and underemployed workers as well as young people in Greater Houston have the skills and opportunities to build successful careers, stabilize their families, and improve their lives.

OUR RESPONSE: AN UNPRECEDENTED, INDUSTY-LED COLLABORATION

ATTRACT unemployed and underemployed Houston residents and youth to middle-skill positions across the region—in part by raising awareness of and changing perceptions about these careers.

TRAIN individuals in the technical and employability skills necessary for success—using curricula built around industry demand and aligned across the sector for portability.

PLACE and retain these workers in middle-skill jobs on career paths that reward those who continue to upgrade their skills and mentor those who need a little support. 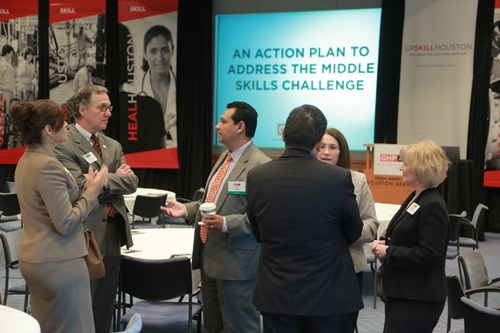 With business executives and employers leading the way, UpSkill Houston seeks to increase the number of area citizens trained for rewarding careers in seven sectors critical to the region’s economy:

UpSkill Houston is currently supporting and facilitating business led collaborations to collectively address the skills gap. This collaborative effort is being led in partnership with business leaders all across the seven sectors that drive Houston’s economy. No one company can solve this challenge alone.

Businesses are partnering with community-based organizations and educational institutions to strengthen the training for and quality of our workers and raise awareness of possible career pathways.

Educational partners are working closely with industry to provide capacity data and develop more comprehensive curricula in an effort to accelerate the movement of students into key skilled professions.

Since its founding in June 2014, UpSkill Houston has laid a strong foundation, steadily built the necessary infrastructure, and begun to experience results in closing the middle-skills gap in Houston’s regional economy.

The initiative also launched a series of videos and related tools to introduce employers and careers to students and their parents. The "My Life As..." series features young workers talking about their journey to and success in well-paid, dynamic careers in thriving Houston industries, and can be seen at UpSkillMyLife.org.

In addition, UpSkill Houston continues to receive national recognition for its work, including from the U.S. Chamber of Commerce Foundation’s Talent Pipeline Management Initiative and the U.S. Department of Commerce and Aspen Institute’s Communities That Work Partnership. 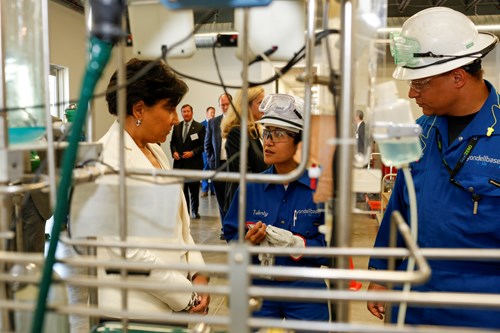